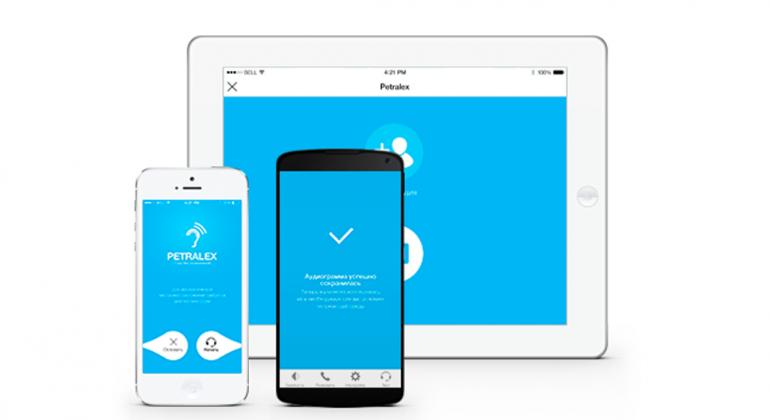 Hearing loss is an actual problem for the modern society. Taking into account continuous noise pollution in cities, the World Health Organization predicts that by 2020 more than 450 millions of people in the world will suffer from moderate or severe hearing losses.

The main functions of hearing aids are:

Parameters of a hearing aid (HA) are selected individually, in dependence on the nature of hearing impairment suffered by the user. Diagnostics may be carried out and required parameters may be determined, inter alia, by an audiometry method wherein tonal signals are played back to a user on special equipment in a soundproof room, and a perception threshold for each signal is registered. Thus, an audiogram for each ear is formed wherein a hearing threshold value corresponds to each frequency. Depending on a value of hearing loss, the deafness degrees from I to IV are distinguished.

An audiogram enables to calculate a necessary (target) gain and output power that ensure sounding most comfortable for a user.

Gain is an increase in sound volume at selected frequencies that is achieved according to various algorithms (methods), such as Berger (Berger et al), POGO (Prescription Of Gain and Output) and NAL-R (National Acoustic Laboratories, Australia). Hearing aids employ one of the algorithms, and corresponding gain factors are set up by a specialist-audiologist in accordance with the user's parameters of hearing impairment.

Compression is the process of adjusting sound volume in a hearing aid in such a way that low sounds are amplified in accordance with given parameters and loud sounds remain at an existing level, i.e., not amplified. Thus, hearing is protected from amplifying loud sounds to unacceptable levels. The compression algorithms may be realized in top models of hearing aids only.

One disadvantage of compact and miniature HAs is their acoustic feedback, i.e., reception by the device microphone and amplification of sound generated by the device loudspeaker. In order to cancel this effect, special filters and algorithms complicating sound processing are used in hearing aids.

Important parameters of any HA is sampling frequency and a delay in signal processing. Sampling frequency determines the device band, and the higher is sampling frequency, the wider audio band is provided to the user. The band of modern digital HAs is about 10 KHz, since higher sampling frequencies require great computational resources and, consequently, causes higher power consumption; and designers of HAs always have to choose whether to increase the band or save the hearing aid battery resource.

The general block diagram of a modern hearing aid.

Analysis filter banks (AFB) and synthesis filter banks (SFB) are used for processing, acoustic feedback is cancelled, the gain and compression parameters being selected and tuned according to the result of user's audiometry.

Implementation of HAs Design Principles in a Smartphone Application

Modern mobile multimedia devices, e.g., smartphones and tablet computers, have all necessary resources for making a digital hearing aid on their basis. They all are equipped with a digital processor, a microphone and provide the possibility of connecting headphones and headsets, and their platforms enable to create applications using hardware of such devices.

Based on the same principles as underlying digital HAs, the Petralex® range of applications is planned to be implemented, which includes a tuned up hearing aid, multimedia players and other applications for users with impaired hearing.

Audiometry for tuning up an application is carried out by the user himself by a simple algorithm. A tone signal at frequencies of 125, 250, 500, 1000, 2000, 4000, 6000, and 8000 Hz is fed to headphones, the user fixes overshooting of a signal hearing threshold by pressing the respective interface button, and resulting data is used for calculating gain parameters. Since hearing is tested and an application is used under the same conditions, irregularities in performance of headphones used may be taken, for simplification, as analogous to hearing loss and compensated by the application algorithms similarly.

In order to calculate hearing correction, the wideband method of changing spectrum envelope with a finite impulse response (FIR) filter is used. Frequency response of the filter is calculated on the basis of audiometry data so as to amplify frequencies at which sensitivity reduction is observed.

Since all mobile devices use stereo headsets and headphones, the scheme of binaural hearing correction according to results of audiometry carried out separately for the left and right ears is implemented in the application.

The block diagram of signal binaural processing with a single microphone.

Owing to power of smartphone processors and the availability of a recharging battery, it is possible to use the sampling frequency of 44.1 KHz with a band up to 16-20 KHz, which exceeds the parameters of conventional digital HAs significantly.

A compression degree (weak, medium or strong) and an algorithm used in the application for calculating gain may be selected by the user himself according to subjective preferences and surrounding conditions.

In contrast to permanent settings of digital HAs, the application may be set up by the user for various conditions and surroundings, the settings being saved as a "profile". After getting to the same or a similar surroundings, the application owner may load the stored profile and use the Petralex® hearing aid without performing any additional setup. Further, the application interface features a number of controls, such as for microphone gain and general sound volume in headphones, all the buttons and controls having a big size and may be easily used by people with motor skill disorders.

One of the features of a HA on a mobile platform is the possibility of selecting a microphone to be used – either a built-in microphone or a headset microphone. The built-in microphone has a better signal-to-noise ratio and may be used as a directed microphone for amplifying sound from a remote source or listening to sounds in a range that exceeds the capacities of the headset microphone, e.g., sounds of the nature. On the other side, the headset microphone is convenient for continuous use, since in such a case the device may be in the user's pocket, leaving his hands free. It should be noted that the use of a headset is not associated by people around with any hearing losses and does not cause psychological discomfort which is also an important advantage of the application compared to a conventional HA.

Test Results of the Application.

The tests were carried out on the basis of an audiogram of a user having Degree I of deafness. 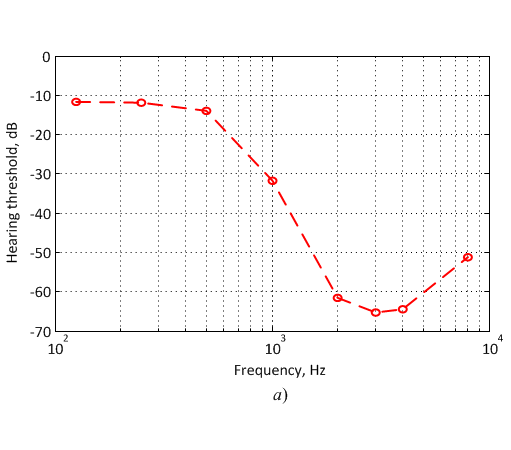 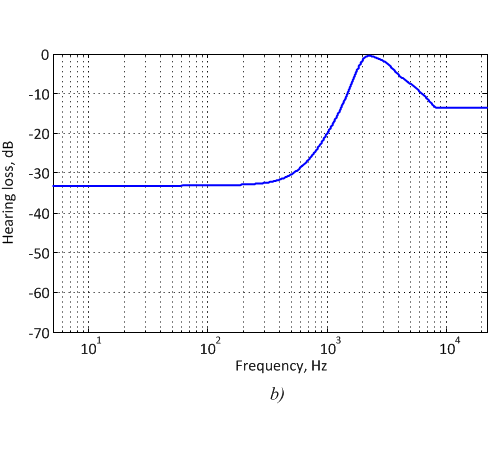 As can be seen in the illustration, the processed signal passed through the hearing loss simulation system has better characteristics that the initial, unprocessed signal passed through the same system. Subjectively, perception comfort is achieved due to a narrowed dynamic range (there are no too low or too loud sounds) and due to maintaining high-frequency speech components that make great contribution to speech intelligibility. 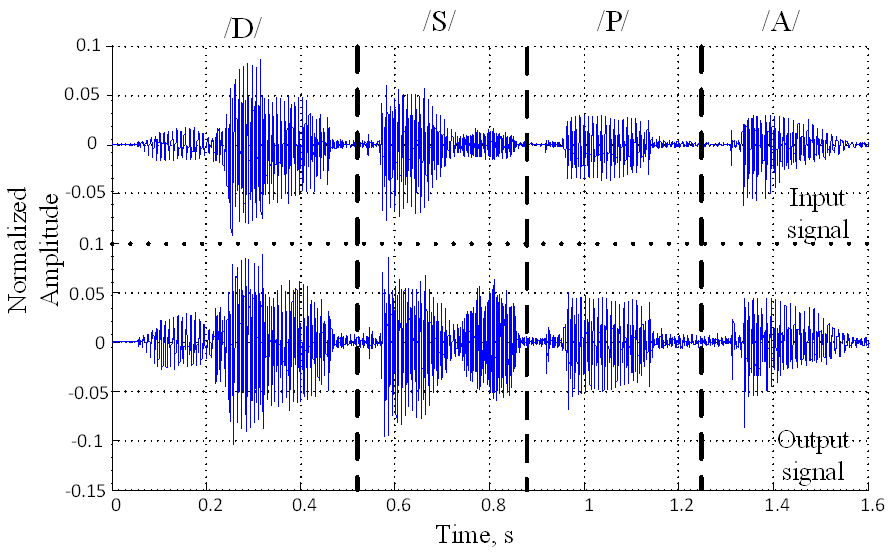 An example of speech processing by the application is given below.

In particular, the processing of the speech signal fragment corresponding to the hissing sound "S" should be noted. Significant increase of this sound is conditioned by the fact that its main energy is in the upper part of the frequency range which is poorly perceived by people suffering from deafness. For the same reasons the plosive sound "P" is amplified significantly.

According to the results of the tests carried out on smartphone iPhone 5 with the standard headset, the full acoustic enhancement is 30 dB.

Amplification of a speech signal.

The total processing delay is not more than 6.3 – 15.7 milliseconds, depending on a device model.

Interfaces of the Application. 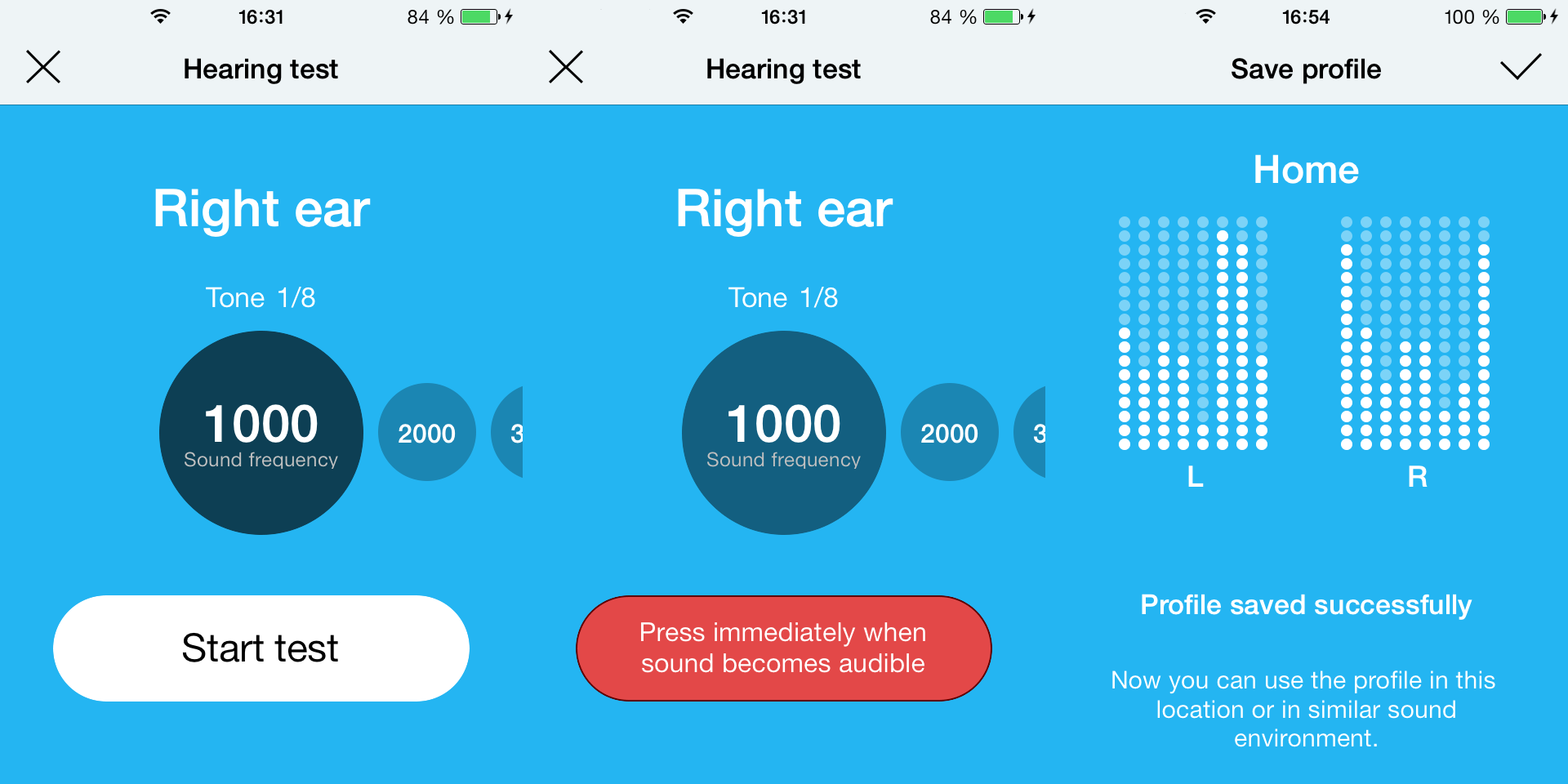 Selection of an amplification algorithm and a compression degree.

User may select a method for calculating the target gain and compression degree in the corresponding application settings. 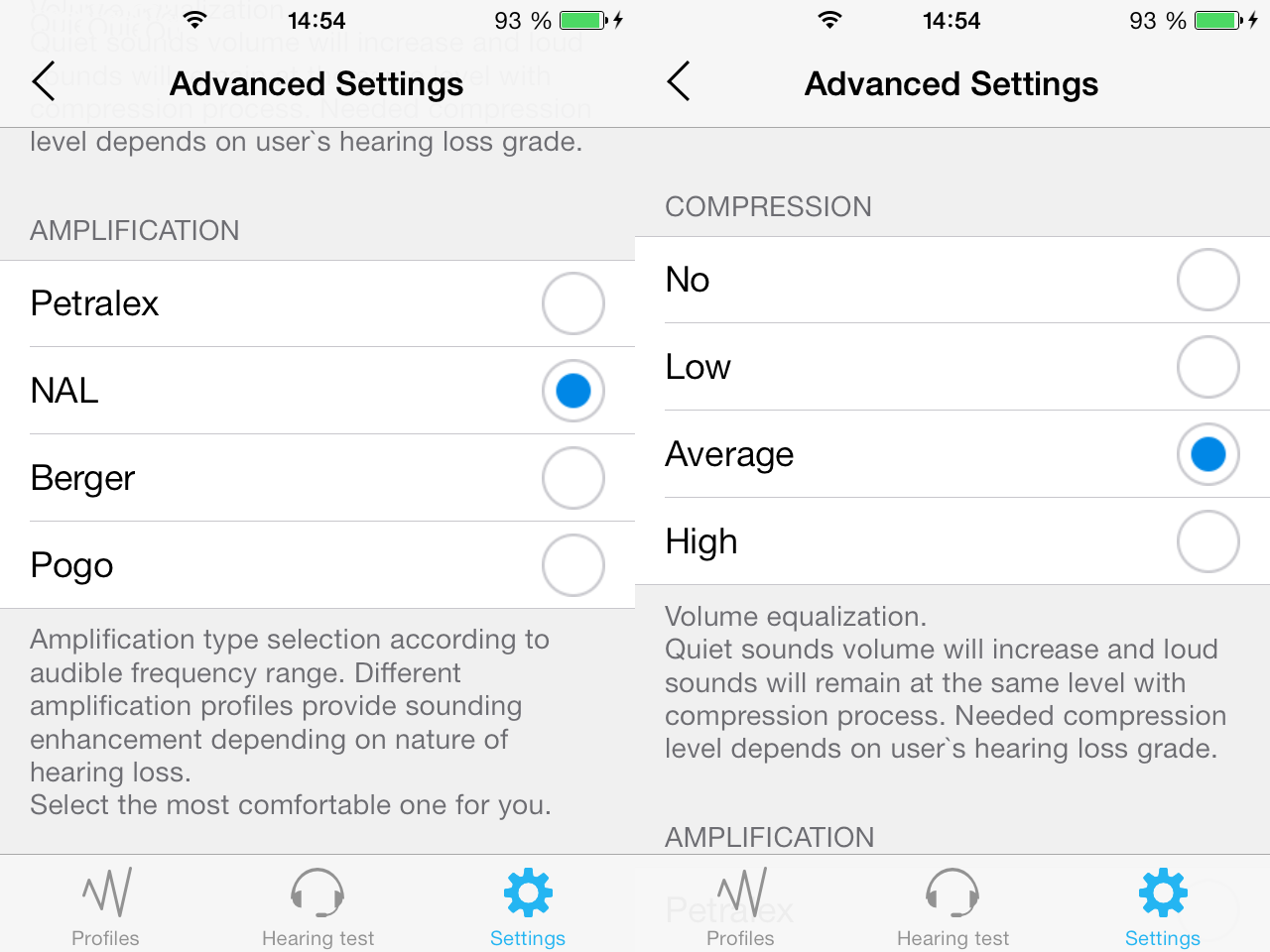 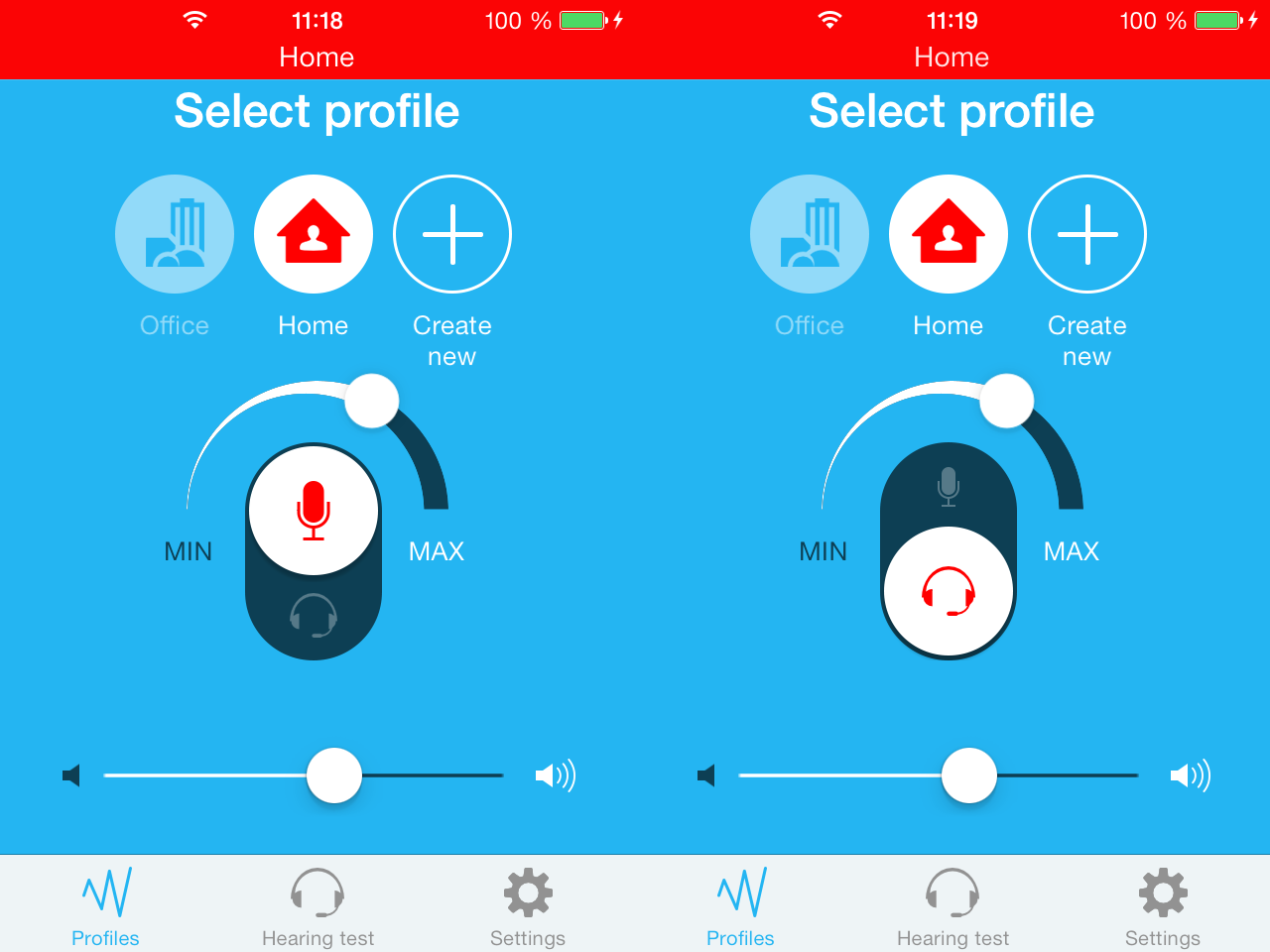 The article presents the main principles of designing hearing aids and implementation of these principles and methods in the application for mobile multimedia devices, such as smartphones and tablet computers.

The tests of the application on an iPhone device running on iOS 7 clearly shows that the parameters of an output audio signal are improved significantly after being processed by the application.

The application running on the basis of a smartphone has succeeded to realize a flexibly set up digital hearing aid relating to the top category of digital hearing aids. It is advantageously different from a conventional HA by signal processing with a minimum time delay, a number of additional functions and settings.

Furthermore, the sampling frequency used is significantly better than the parameters of best digital hearing aids, thus creating possibilities for perceiving enhanced sound range by the user, and the compression algorithms applied protect the user's hearing against too loud sounds.

The Petralex® application on the basis of widely spread mobile devices and operating systems is capable of replacing portable hearing aids intended for users having deafness categories I and II, without causing any psychological inconvenience, since a standard headset or headphones are used for its operation.